About three weeks ago I sat down at our dinning room table with a large Elvis book titled Elvis Forever In The Groove. It was fricken cold outside and I didn’t have any paintings on deck waiting to be worked on. So I decided to thumb through this book in the warmth of the inside and maybe sketch out a few of the photographs for fun and also just to keep me sharp. As much as I wanted to sit down in front of the television and OD on Netflix, I knew I shouldn’t waste the time. And besides, sometimes your sketches can evolve into a full-blown idea or a mini series of new paintings.

The first image that caught my eye was of Colonel Tom Parker who was Elvis’s manager. He had on a cowboy hat, which I immediately wanted to draw. I never intended to draw him in particular. I just wanted to use elements of his facial structure and add in my own features (that’s why he has the giant mustache.) As I was working on the sketch, I also incorporated features of the characters in one of my favorite Western movies Tombstone from memory. So the Colonel also has the look of some of the members of the Clanton gang who wore the red sashes.

The next image I worked from was of a member of Elvis’s band who played bass, Bill Black. Here I continued to exit the limits of realism and headed straight into Psychadelphia. I used his silhouette and some of his facial characteristics in the beginning. He didn’t even have a cowboy hat on, but I wanted the hat to be throughout the series since it was my initial inspiration. Next came Carvel Lee Ausborn also known as Mississippi Slim, a country music singer who was a big inspiration to Elvis growing up. I am still working on that painting, but he should be finished in the coming days. 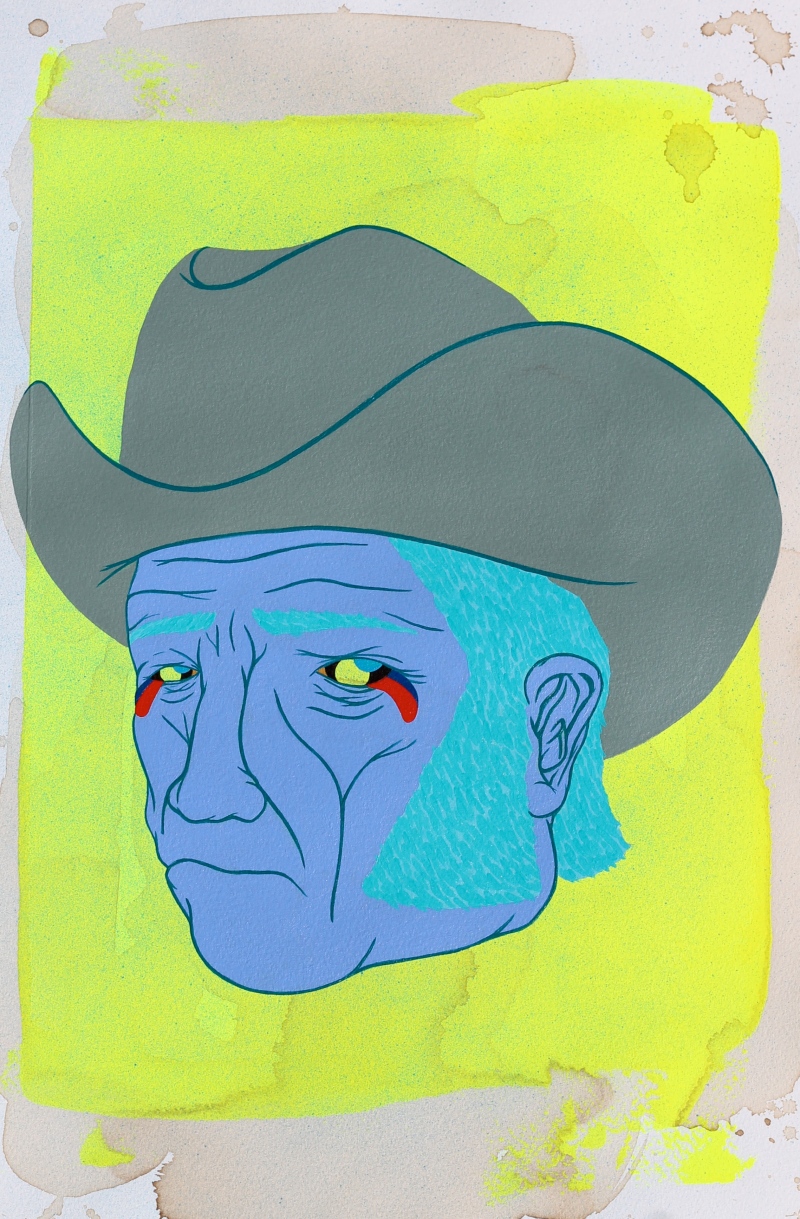 And last, my painting of the King. The original photograph for this came from a different book titled Private Presley: The Missing Years – Elvis in Germany. It showed Elvis in his Army uniform and the way he held his head and his blank expression really spoke to me. Again I chose to do an extremely loose interpretation of the image, altering and manipulating the features as I felt necessary. To this day no one could look cooler than a young Elvis. My color palette took it to another level though.

After sketching out these cowboys I felt they had a lot of potential and I was excited to see what else I could do with them. I wanted to go back to paper and so I used a variety of painting techniques including coffee stains for my backgrounds. The end product turned out a little crazier than I originally expected, but I dig them. While working, I am constantly thinking of the possibilities and different directions I can take. Unlimited freedom is one of my favorite things about being a creator and I blend all of my inspirations into my own personal soup. Sometimes it gets a little murky.

I plan on painting more cowboys on paper. In fact I have completed a Bill Monroe-deo clown already. Ha! I love being a painter.